15 Ways to Tell a Guy You Like Him in School 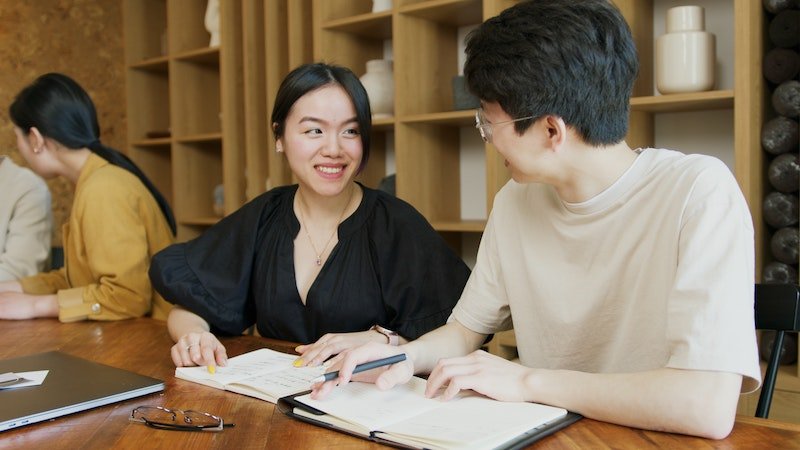 Do you know a guy in school you like and want to let him know without looking desperate? You can try these tips without feeling awkward or scaring him off.

Every girl who has had a major crush on a guy in school knows what it feels like to wait endlessly for him to make a move on them. Somehow, you can tell he just might feel the same way about you even though he doesn’t seem open to making the first move.

Girls react to this kind of scenario in one of two ways. Some wait and keep waiting. And others don’t. They go ahead to make the first move; they tell the guy they like him. I want to believe you are the kind of girl who does not wait.

If you are, then here are fifteen ways to tell a guy you like him in school.

1. First Realize That “Tell” is Many Things

To tell a guy that you like him in school, first realize that “tell” is many things, and telling can be done in ways that do not involve speaking. For example, you can tell someone to meet you outside without moving your lips. All you have to do is bob your head towards the door, and they will get it.

Hints like this are very important when trying to tell a guy you like him in class. Realize this. With the way you look at him, he will get the feeling that you want to be more than just friends with him. If he likes you, he will respond positively to your signal.

2. Let Go of the Fear of Being Rejected

To tell a guy, you’re interested in him in school, you have to work on yourself and how you perceive rejection. A wrong perception of rejection will keep you from making a move even when you are dying to.

Rejection might hurt, but you can handle it. Let go of the fear of sounding awkward or being rejected. After all, how bad can it get? You are only going to be getting a No. Or, at worse, you will be laughed at. Nothing more.

An excellent way to deal with the fear of rejection is to look inward and realize how amazing and beautiful you are. Walk to a mirror and stare into it: why would anyone reject that?

Related: 17 Powerful Signs a Guy Likes You in School

People love compliments because it makes them feel loved and appreciated. This is true. We almost always compliment the things which we love and admire. Like that dress, you approved of last. Did you not love it?

If you want to tell a guy you like him in school, start to compliment him a lot. Compliment his looks, his beard, his smile, his clothes. Say it in a passionate way so that he does not get the feeling that you are probably just teasing him.

Compliments are going to open him up. So that, even when he is alone, he thinks about you and goes: “She probably really likes me.”

4. Show Interest in His Person

Remember what I mentioned in number 1? Tell is many things and can be done in many ways. But the important thing is that all forms of telling attempt to relay information across.

The important thing is that the person gets it. You can tell a guy in your school that you like him when you show genuine interest in his personality and thought process.

If you both hang out with him a lot in school, make every second spent with him count. Listen to him, and do not cut him off when he talks. Give him the feeling that he matters to you.

5. Show Interest in His Hobbies

You can tell a guy you love him by being genuinely interested in his hobbies. That is, taking a liking for the things he likes doing in school. For example, if he loves playing football, you can begin to watch him play and maybe play some football too.

Then one day, you can say something like: “I can’t believe that I now love football because of you.” Say it in a sarcastic way. He is most probably just going to laugh it off, but he is going to realize that you really do like him.

Read: How to Tell Him How I Feel (8 Actionable Tips)

Gifts are a great way to show affection. When we buy people gifts, especially a guy that we like, we are telling the person to the person’s face that we thought about them and thought a gift would make them happy.

A guy who receives a gift from you in school will immediately know that you like him. If he likes you too, he is going to get closer to you.

7. Remember Little Details About Him

Remembering little details makes people feel quite amazing. It means that you like them and are genuinely interested in them. A great way to tell a guy you like him is by remembering the little details about him.

If you both are close in school and speak to each other much, remind him of something that happened a while ago, something you both really laughed at.

When next you notice that his shirt is folded awkwardly or his collar is out of place, walk over to him, smile at him, and fix it. By doing this, you show that you care about his looks and want him to look better.

He will immediately know that you like him. No doubt.

If possible, suggest new clothes for him. Point at a shirt when next you both walk down a fashion store and say: “Hey, that will really look good on you.” Get him the cloth if you want, haha. This is a really effective way of conveying to a guy you know in school that you like him.

Read: 10 Signs the Kiss Actually Meant Something to Him

When next you are with him, pay for whichever stuff you can pay for. The food, the transport fare, anything at all.

Men understand the value of money a lot; they know that for a person to spend money on anything, they must like that thing a whole lot.

Spending money on him shows that you like him a whole lot. He may act like he does not see it, but he does, and if he likes you too, he will go closer to you.

10. Come Through for Him

To come through for someone means being there for them when they need someone the most. Imagine that this guy in school that you like has been moody lately; walk over to him, ask why, and listen attentively as he talks to you.

You can say stuff like: “Hey, I am always here if you need anyone.”

He knows you care and possibly like him. If he likes you too, he is going to open up to you and get closer to you in school.

11. Ask If He Has a Girlfriend

Walking up to a guy and asking if he has a girlfriend sends an array of thoughts into his mind. And amongst these thoughts, you will usually find one that is similar to: “Why did she ask me? Does she like me?”

If you like a guy, a great way to tell him is by asking him if he has a girlfriend and responding to his answer nicely.

For example, if he tells you no, you can respond by saying: “Wow, me too. I don’t have a boyfriend. Wait, what are we?” Be sure to use humor to your benefit.

You can tell him you like him by telling him personal stuff about yourself. By personal stuff, I mean things he considers secret.

Try to tell him about your past relationships. Also, tell a story about how you didn’t think you’ll find someone so loving again until you met him.

This is just you hinting to him that you like him very much. And if he is smart, he will get it; he will get closer to you if he likes and wants you but will withdraw if he does not.

13. Invite Him to Small Events

You can tell a guy that you like him very much by inviting him to school events that only a few people are going to attend.

For example, if there is a hangout you and your friends want to go to, invite him to it. Say something like: “Hey, my friends have this party, and I would really love for you to be there.”

Read: 10 Things to Whisper into His Ears to Make Him Go Wild

Jealousy can be healthy. And it can be a big signal. You can use it to show or tell a guy that you really like him very much. Just don’t overdo it.

Tell him you don’t like how a certain girl hugged him, that it made you feel some type of way. Tell him he smiles too much at certain girls, a brighter smile than the one he flashes at you.

Just do it. Walk over to him in school and say the words out. Plain. Hey, I like you.