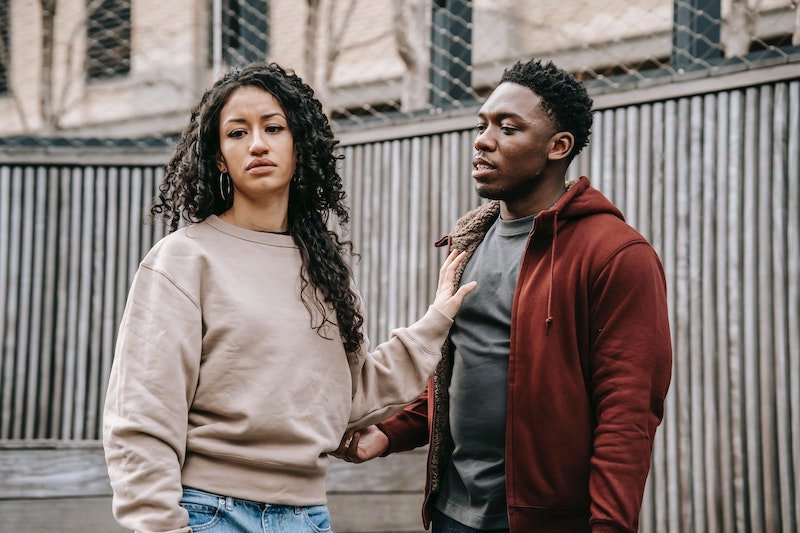 If you’re in a relationship and have got a great girlfriend, you would want to do your best not to make unnecessary mistakes that chase women away. You know that being a keeper is not easy. One reason is that it does not come by instinct. It is something every guy has to learn.

Many men struggle to keep a woman’s interest for as long as they’ll want to keep it. For some reason or the other, the woman just goes away as though she is being chased away. In this article, I will be exploring why this always happens. Look through these ten mistakes men make that chase women away.

You have to understand one basic principle of attraction. The masculine provides strength and support. And the feminine relaxes into this strength. What this means is that you are supposed to make a woman feel safe.

If, for some reason, she does not, she is going to leave.

When next something scary comes up, she will remember to run away.

Read: 14 Ways To Ask for Forgiveness (and Get It)

While too much attention essentially chases a woman away, an awful mistake, ignoring her does the same, maybe to an even greater extent.

Ignoring her just makes her lose interest—many times, especially in the early phase of a relationship, her interest is linked to your own level of interest. If she senses that you are pulling away, she will pull away too.

Talking too much is one mistake men make that chases women away. Men who talk too much do not really appeal to women, and for a good reason. Please, note that by talking too much, we mean one-sided conversations where the man says everything, leaving the woman with just the option of listening.

Often, men like this only talk about themselves—they find a way to drag all the attention their way.

Even though a woman might be around a talkative man for a while, sooner or later, this mistake of his is going to chase her away. Because she realizes that he can’t be trusted with secrets, this is especially true about men who talk about other people.

She only realizes his need really impresses her. I will talk about this in much detail later.

This does not pass as a mistake because it is quite intentional most of the time. But if you lie to a woman, whether you have just met her or have been together for a while, then you should be prepared to lose her because the lies are sure going to push her away from you.

It does not have to be full-blown lies. They can be very little lies. But once she catches up, she will get scared of you. Fear means she can’t enter into her feminine essence because she does not feel safe.

I like to tell men to be careful when a woman confronts them with a direct question. Many women fear confrontation and so wait until they know the truth before confronting.

If she confronts you directly, then she probably knows the truth.

Read: 10 Simple Ways to Bring Back the Intimacy in Your Relationship

5. Being a Creep Chase Women Away

Being the creep means keeping tabs on her life and trying to control her.

The feminine is free—it should not be controlled, especially by a man who has not yet been given full control of her emotions. When women acknowledge a man’s masculinity, they might agree to be led by this man.

But if he goes too far, they will back away and leave him.

Don’t scroll through her phone. Don’t ask her where she was at this night or that night. Don’t tell her she is lying, except you are 100 percent sure of the truth. Doing those will only chase her away.

6. Talking Down on Other Women

The last thing you should do around a woman you plan to keep is talking down on other women. This upsets her ability to feel safe because she internalizes the fact that at any point in time, you may begin to treat her just like you treat other women.

A common pick-up tactic with men is talking excessively about the number of women they sleep with, perhaps in a bid to raise the value and attract.

The truth is, this just does not work. It is going to chase her away, ironically.

Read: 5 Ways to Find Yourself Again in a Relationship

7. Being too Sexual, Too Early

This is especially true if you both haven’t begun dating yet. She may like you and maybe even want to get down with you in the future, but if you rush things, she will go away.

Your being too sexual too early around her spells some level of disrespect; it means you are not willing to respect her enough to keep away from her body until she approves of romance and, eventually, sex.

Too much attention can be suffocating for a woman. Granted, she may love some attention. But too much of it? It will begin to feel like she is living her life with two people. This mistake will push her away for good.

It will feel like she is sharing her life with you. The truth is, she is not. She has a life of her own, and you have yours.

If you don’t want to chase her, live your own life and let her live hers.

Don’t do all the calling. When she drifts away from you, let her be. She will come back around, ironically.

Read: 10 Signs Your Woman is Losing Attraction to You

When you try too hard to impress a woman, you are telling her that you will do anything to keep her attention. She might love this at first, but as time goes on, she will be repulsed by it.

This happens most when your impressing her is starting to have a toll on you.

For example, if you flaunt yourself to be the rich guy but get hit financially after a few dates so that she senses some hesitation whenever it is time to pay the bills, she is going to leave you.

It is, therefore, best to be genuine and be yourself around a woman.

Ghosting and all other forms of emotional abuse are mistakes men make that chase women away.

Women, remember, want to feel safe. If you make her feel unsafe, she is going to leave without really turning back.

If you want to keep your woman and not chase her away, do not make her feel unsafe. When she begins to feel unsafe, she will leave.